We’ve long admired Sony’s SXRD (Silicon X-tal Reflective Display) projectors. A genetic relation to JVC’s D-ILA technology and LCOS, they combine excellent black level with pin-sharp detail and vivid colour. You can read our thoughts on Sony’s new entry-level model, the Sony VPL-HW20 here, but if 3D is your thing then you might well be tempted to spend £5,400 on the brand’s first 3D model, the high-end Sony VPL-VW90ES.

The Sony VPL-VW90ES is a direct descendant of the VPL-VW85, but with some significant tweaks. Obviously the biggest difference is that it’s 3D compatible. Unlike JVC, which has chosen to make its entire new line-up 3D compatible, Sony has dimensionalised just one model. But it has done a terrific job on it. 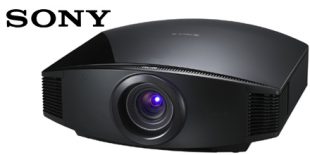 Rather cleverly, Sony’s engineers have incorporated the 3D sync transmitter for Active Shutter glasses into the lens assembly itself. This makes installation a breeze. The projector itself functions with standard Sony 3D TV eyeware, although you will need to add specific filters across each lens.

Home Cinema Buyer enjoyed an exclusive session with projector at the 2010 IFA tech Expo, and more recently with the first production sample to hit the UK, and we were knocked out by the brightness and depth of its 3D presentation. The image has a dynamic contrast of 150,000:1.

We thought that subjective image definition was excellent on 2D Blu-rays, with plenty of fine detail. Much of this is retained when you don the 3D spex, as crosstalk (the slight ghosting effect you get when one eye channels leaks into another) seems to be extremely low.

Interestingly, the projector has a trick its rivals from JVC do not: it’ll convert 2D sources to faux 3D. While we’d advise some caution using this, we can see the appeal of hooking up a console and depth-rezzing some gaming classics.

If you’re serious about getting a damn fine projector, the price shouldn’t be a surprise, but for many of us, it may be just that little bit too expensive!

Why you should buy the Sony VPL-VW90ES 3D Projector

This div height required for enabling the sticky sidebar